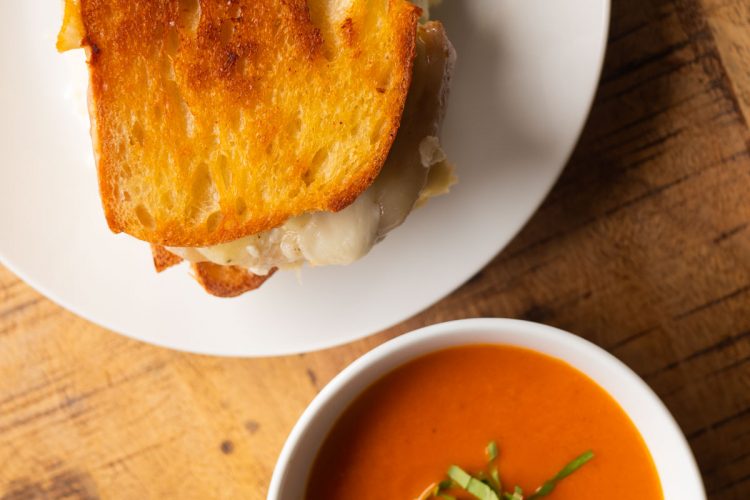 As we all continue to “shelter-in-place”, if you’re anything like me, some comfort food is well needed and deserved right now. When I think about the dishes in my childhood that brought me the most joy, grilled cheese and tomato soup is right up there at the top of the list. Of course, being the daughter of a working mother, it was grilled American cheese on Wonder Bread and a bowl of condensed cream of tomato. It was, nevertheless, a magical combination.

When my restaurant was still open, I knew Grilled Cheese & Tomato Soup had to make an appearance on the menu. I also knew that Campbell’s and Velveeta wouldn’t cut it for paying guests. Therefore, I rolled up my sleeves, headed for the cooler and took stock of what was available to make a truly out-of-this-world dish.

The blend of cheeses is what makes this sandwich stand out from the rest. And the bread. Please, for the love of all that is sacred, this is not the time to use wimpy, pre-sliced, grocery store, preservative-laden, squishy white bread. Now is when you get an artisanal loaf of real bread from an actual bakery and slice it by hand. And make it thick or it won’t hold up to the copious amounts of cheese you’re about to heap on top of it.

So. Much. Cheese. When I was working on the recipe for this post, the hubs came into the kitchen. I forced him to watch as I shattered the crispy golden crust of bread with my knife. As I pulled the halves apart and the cheese stretched into a web of white before finally breaking in two, I heard him mutter under his breath, “Yuck. That’s too much cheese.”

I felt like Wile E. Coyote when Bugs Bunny hits him on the head with an anvil. Too much cheese? How dare he?! Needless to say, if you aren’t a fan of cheesy Grilled Cheese, don’t try this recipe. The tangy tomato soup is the perfect balance for all that richness.

Make sure you dip! 😜

I know, it’s more work than the dish you probably had as a kid, but what the heck else do we have to do right now? So, get in the kitchen and start cooking. Let me know how it goes!

This grilled cheese and tomato soup will ruin you for anything else. The blend of cheesy richness and bright, tangy tomato are perfection!