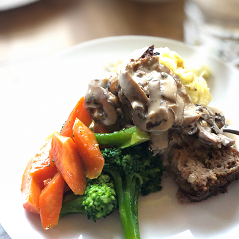 This might push me wholeheartedly into the category of ‘freak’, but I love winter. And cold weather. When else does a steaming bowl of stew or hearty braise feel so at home on my fork? Never. It’s the perfect time of year to fill my belly (and my family’s) with comfort food of every kind. Noah looked at me yesterday and said, “Mom, we don’t have enough stew anymore.” I couldn’t agree more, buddy.

I’ll make stew this weekend when it can slowly simmer to meld together into comfort perfection. Tonight, I’m going to make meatloaf. It is surprisingly easy if you plan ahead. Just make sure to have your ground beef thawed (I keep a few pounds in the freezer for emergencies) and a few pantry staples at the ready. To make it extra luxurious as the wind whips and the snowflakes threaten, add my braised mushrooms in cream sauce. They are the perfect topper for meatloaf alongside some buttery mashed potatoes. It’s a weeknight meal that is fit for company.

This meatloaf comes together in just minutes.

Not your momma’s meatloaf, there is NO ketchup to be found here; just rich, unctuous meatiness perfect for a weeknight but delicious enough for company!