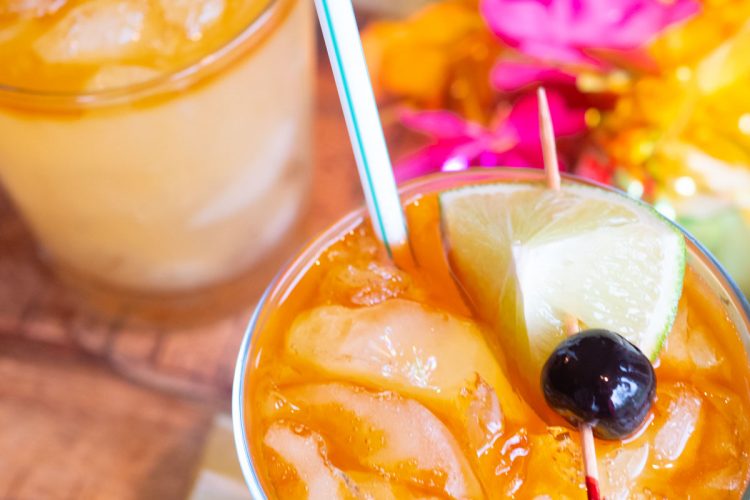 I normally tend toward food recipes. But in these times of crisis, it seems happy hour starts earlier every day. My dining room bar cart has seen more activity than normal as a result of this change, as has my fridge.

I make sure to keep fresh lemons and limes on hand at all times for whatever whimsical drink hits my radar on any given Tuesday, and I took to making ice the old-fashioned way – in a plastic ice tray. Our poor built-in ice maker (circa 1986) just can’t keep up with Covid-level consumption. 🤷‍♀️

I stock up on gallon bags of homemade ice cubes for whenever we “social distance” in the driveway with the neighbors. Or for happy hour in the kitchen. At 2:45 pm. This is no time to judge.

During a recent post I made Painkillers. They are delicious. And after an embarrassingly large number of pitchers consumed, I’m tired of them. However, I stall have lots of rum left on said bar cart.

I was originally introduced to this lovely cocktail at Trader Vic’s in Chicago, with eight of my closest girlfriends during a weekend train trip to the windy city. Then I was reminded of them again by my mother-in-law a few years ago. She used to drink them at the Polynesian Resort at Disney while her young children ran amuck in the park, unattended. (Talk about the good ‘ol days!)

Yesterday, I just needed an excuse to use some of that rum, so here we go. This drink is not for the faint of heart. My bourbon-on-the-rocks-drinking hubby didn’t think it was strong, although I tend to disagree. Drink cautiously, don’t plan on driving anywhere – oh, that’s right, we can’t – and mix up a pitcher of these to celebrate the start of another weekend in quarantine.

These drinks are fruity, delicious, and STRONG. Sip slowly and enjoy!