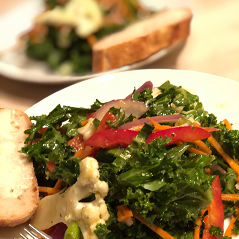 After my overly productive haul from the grocery store last week, I knew I would be making something light and bright to go with my bean soup with lemon parsley breadcrumbs. But I didn’t want to get carried away…it’s still winter, after all, and I wanted a salad that would satisfy my need for something a little hearty, too.

Kale fits the bill here. Although ubiquitous now – my definition of that too-long-word: when McDonald’s starts using or selling an ingredient, it’s time for me to stop – it really is a yummy veggie when you treat it right.

My idea of treating it right is to get the full-grown version, and season it properly. Pretty simple concept, don’t ya think? It’s cheap, good for you, packs a wallop of nutritional value, and tastes delicious when paired with other full-flavored fruits and vegetables.

Citrus fruits are in season in the winter. I love them any time of year, but I especially love using all sorts of them right now. I used lemons today, but this salad would be equally delish with fresh grapefruit juice and zest, or a combo of lemon, lime and orange. You could also add in some grilled chicken or avocado and call it a main course lunch. Or you could serve it alongside a giant steak and a baked potato and call it dinner for my guys. 😉

I’m going to serve it with my bean soup and tell the hubs it’s “health food”. That’s kinda true.

This bright salad is great on it’s own. You can also add a little leftover grilled chicken or shrimp, or an avocado and make it a delicious light lunch!