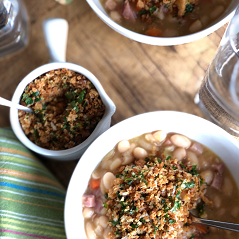 Those who know me, know I’m a little kooky when it comes to food. I love it. I love to cook it, taste it, look at it and read about it. I was at Meijer the other day and became overwhelmed in the produce section. Yes, I used the word “overwhelmed” in relation to a trip to the grocery store. Kooky.

Anyway, I couldn’t stop myself. By the time I left that department, my cart was almost full. (That’s a BIG cart!) Everything was so beautiful. The bright greens of lettuces, herbs and cucumbers, the earthy browns of a dozen different types of mushrooms, red peppers, purple grapes, white cauliflower, orange carrots, it was a buffet for the senses.

I wondered then, how often we stop to think about how lucky and blessed we are. The array of available foods, through transportation, refrigeration and science is quite remarkable. It makes me happy to know it’s available for my belly as it leads me down all sorts of exciting culinary sideroads. Last week the hubs mentioned I should make some bean soup, so I was thinking about that (while folding a load of laundry because momming never stops) and I opened the spare fridge to look at my recent haul.

Bean soup is pretty rich and (the way I make it) very meaty and salty. I knew I wanted to add some crunchy contrast on top and serve a bright kale salad with it. I glanced in the see-through crisper and saw my red peppers, scallions, lemons and fresh parsley. Yum. I know just what to do.

We are still deep in the heart of winter here. My weather app said it feels like 15˚F this morning. Brrr. The hubs had a great idea. I’m going to hunker down with some music and my stove and wait out the next few weeks. A big pot of thick, hearty bean soup will be perfect to get us through to spring. So that’s what I’ll be working on today. While I’m counting my blessings.

This thick, rich bean soup is perfect for a chilly Midwestern evening.