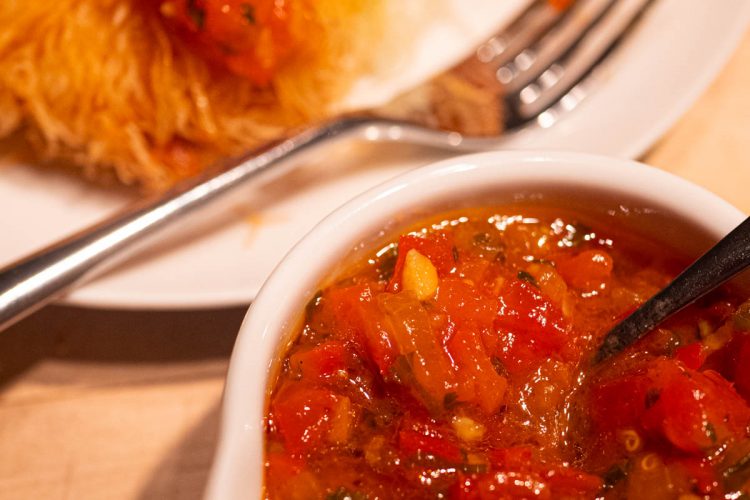 I have a confession to make. I stole this recipe. Years ago, when I worked for a chef in Detroit. It was a super-fancy restaurant and I was a server there. The chef was Japanese (and a genius!) and we often had pharmaceutical companies rent out the entire space to entertain local doctors, hoping to sell them whatever brand of medicine they were touting.

The evenings always began with passed hors d’oeuvres. Sometimes the doctors would crowd the top of the stairway when they saw us coming up from the kitchen with platters of snacks. To outsmart them, every once in a while, we would take the elevator up to the main floor. In the 20-or-so-second ride time, I would jam as many of these little buggers into my mouth as possible. Yep, they’re that good.

Naturally, when it was time to open my own restaurant, I had to have them on the menu. Since I hadn’t worked in the kitchen to learn the recipe, I needed to figure it out on my own. I decided I would start by googling it and found the original in an old newspaper article.

It’s really the sauce that makes this dish stand out. And that’s what I wanted on my menu. As always, I upped the ante. A little more spice, a little more sweet, a few more herbs and it was transformed from someone else’s dish, into my own.

We don’t have it regularly anymore. However, when I do make it now, my family (well, Noah!) likes it so much that we have it as a main course, usually during Lent since we know seafood isn’t my favorite. I serve it with coconut rice and a bright green salad. But it is equally delicious served as an appetizer any day of the year, the way I first had it.

In any case, it’s worth finding the Kataifi (shredded filo dough) and getting the (somewhat) long list of sauce ingredients together. It’ll keep in the fridge for weeks after you make it. And I found out yesterday that it makes a delicious condiment for rotisserie chicken sandwiches!

You’re gonna want to try this!

So, get in the kitchen, and get cooking! Let me know how it goes!

These shrimp are shatteringly crisp, and the sauce takes them to over-the-top yumazing!